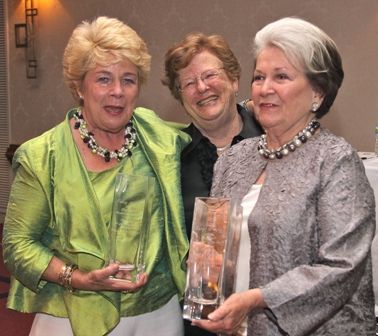 The First Light Gala, held at the Doubletree Hotel on April 30, was a delightful evening for over 300 attendees and 35 volunteers who helped conduct the silent and live auctions. The Presenting Sponsor was Protective Life Corporation. Carolyn King, a Protective Life Senior Vice President and President of the First Light Board of Directors, hosted three tables of Protective staff who enjoyed the program and live auction immensely. Burr and Forman was a Gala Investor. Tables were also sponsored by corporations, churches and individuals who all support First Light’s work in various ways.

The evening began with a Silent Auction, offered in three sections, followed by the program which, each year, honors dedication and service by First Light supporters.
Two longtime friends, Nancy Skinner and Betty Drennen, were the Honorees of the Year. Both women have been dinner and overnight volunteers, served on the board of directors, and have been avid advocates for the mission of First Light for 20 years. Their greatest enjoyment has come from spending the night with the shelter guests and offering a personal presence to women whose lives have been traumatized by homelessness. Nancy and Betty have embraced a role which assures the guests that they have not been forgotten by the community at large. And they do it with humor and grace. It was particularly touching that Nancy’s son, Jay Skinner, was able to attend, still wearing his Army Reserve fatigues after performing tornado disaster assistance all day.

The Volunteer of the Year is the Starnes Davis Florie law firm, whose staff has been serving dinner to the guests of this emergency shelter for women and children for the past ten years. Dawn Trull, the liaison from the firm, schedules their service dates. She accepted the award with Mike Wright.

The Live auction was conducted by Christie King and the evening’s emcee was Alabama’s 13 News Anchor, Andrea Lindenberg. The two provided a lively team approach as they offered singular art and unusual experiences to the audience. Offerings included works by local artists such as Frank Fleming, Maralyn Wilson, Tres Taylor, Ben Carlisle, Libby Wright, Carol Misner, Meredith Keith, Nall, Michael Marlowe and Steven Atha. One item was the piece done by Sogni, the daughter of Honoree, Betty Drennen. The auction also included experiences such as a 2 night stay at the Atlanta Ritz Carlton accompanied by a spa experience with a wine basket to take on the trip. Other offerings: a wine tasting party for twelve in your home by Wynter Byrd and Ingenium Wines, a steak dinner for the shelter guests, a cooking and dinner experience at Bottega and Highlands, and a gourmet catered luncheon with the evening’s emcee, Andrea Lindenberg.

A highlight moment in the evening was when the audience was invited to conduct its own individual table auctions to take home the clay calla lily centerpieces, which were hand built by artist Juanita Alexander Walker. The room filled with laughter and a competitive spirit as the overall greatest bidder for the lily won a $100 gift certificate to the Village Tavern. The lily was chosen as the centerpiece because of its similarity to the First Light guests: flexible, hearty and strong. This beautiful flower, once considered an unwanted weed, works well as an elegant, long-lived, cut flower…if treated well.